In our last installment we paused at serial number 3-54640, made during the initial Wagenfeld body style era of the ABC portables and which was made just after introduction of the ribbon selector device (which employed a lever at the right side of the machine.) We now take up our examination with thorough coverage of the continuation of the early, all-Wagenfeld bodied production. 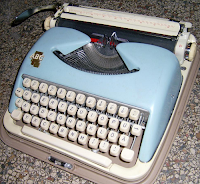 ABC / serial 3-69883 / Thomas Furtig collection. This example shows another two-tone combination, in beige and light blue. Many collectors will have noticed the red triangle seen on the right carriage end of this machine; this is a mark for the page end indicator, a feature of the ABC which warned the typist of the page end approaching and which was similar to Smith-Corona's "Page Gage" in the United States. 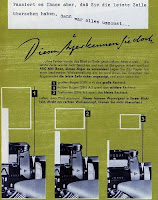 Above, illustration of the page end device and how it is used for three different sizes of paper. This prevents the writing from trailing away at the end of the sheet- which is shown at the top of the illustration. 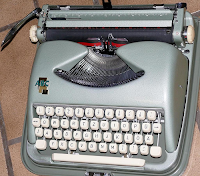 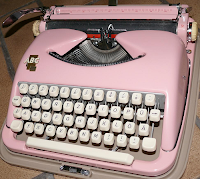 ABC / serial 3-77380 / Thomas Furtig collection. This is the first pink machine we've seen in our look at this line. Interestingly, in the large database we have constructed for this project it is the earliest identified pink machine. Furthermore, there is only one other pink machine known (at least in our database, so far) and we will in fact see that machine as well later on. Pink as an optional color doesn't appear in our advertising material either - you certainly don't see many ABC / Cole-Steel machines in this color. 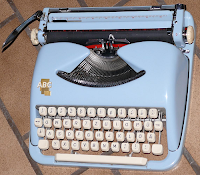 ABC / serial 3-83765 / Thomas Furtig collection. This machine at first might look like one we've seen, but look again; this machine is not two-tone but rather is the same very attractive blue color overall. Also note that this machine's top cover doesn't have the small metallic buttons on the sides to allow it to be removed; it simply pulls up and off. This is the 29th machine listed in our database, and the next machine you will see is the 30th machine in our database. 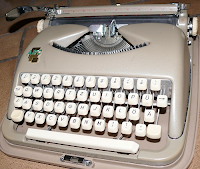 ABC / serial 3-99632 / Thomas Furtig collection. This machine features the dark beige (or dark creme if you prefer) hammertone paint discussed previously as one of the three known 'hammertone' paint options. This extra feature in the finish adds a great deal of depth to the paint's appearance, which makes any machine so painted appear very luxurious .. and expensive.

The very next machine in our database is a Cole-Steel, and in fact so are the next nine machines. There is a solid run, or block, of Cole-Steel machines running from serial number 3-108447 (owned by Mark Rosenzweig) through 3-163529, which we will see next. However, one machine in this block is very notable for us; serial number 3-149323, a Cole-Steel owned by Christopher Pilant, is known to have been purchased originally on March 21, 1960. This gives us our first solid date evidence. 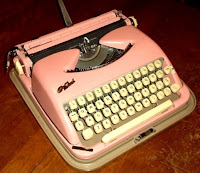 Cole-Steel / serial 3-163529 / Will Davis collection. The machine we see here is somewhat significant, in terms of the progression of models of this whole line, so we will carefully detail the things that it represents. Not only is this the last known, or in other words highest serial number known, Cole-Steel in our database, it is also the second and last known pink machine of any label. In terms of mechanics, this machine is the earliest known to incorporate the new dial-type ribbon color selector to the right of the keyboard; this is much easier to see than the lever mounted back on the right side. Machines with higher serial numbers than this one seem to go back and forth between the dial selector and the lever selector with no apparent pattern; however, this is the only machine with a serial number prefix of "3-" that has the dial type selector and in fact is the highest serial number in the database with this prefix.

Next installment: Continuing with the original Wagenfeld body style in the serial number range with a "4-" prefix.. and new labeling.
Posted by Will Davis at 2:33 PM