We now begin our examination of the ABC series in order of serial number. 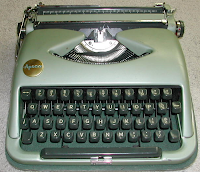 APSCO / serial 1-2442 / Courtesy Carmen, member of the Portable Typewriter Forum. This machine bears the mark "APSCO" which is certainly that representing the Automatic Pencil Sharpener Company (which was actually a business division of Spengler-Loomis Manufacturing Company) and which is familiar to a generation or more of students who daily used APSCO pencil sharpeners in school classrooms all over the United States. This is the earliest known ABC series machine, bearing the lowest serial number and is only one of two known to have a serial number prefix of "1." This example has 43 keys (typing 86 characters.) The exact arrangement by which APSCO acquired these machines has never been discovered, nor have any advertisements. Further, it is not known if the following Cole-Steel contract was the result of a buyout of this arrangement or license or if it was totally unrelated. Regardless, this is a rare typewriter by virtue of its name. As with all of the early machines of this original make there is no model number or name. 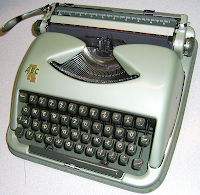 ABC / serial 1-4929 / Thomas Furtig collection. Another very early ABC is this fine green example owned by Thomas. This is the second of two known machines having a "1-" prefix. Both of the machines, seen on this page, are notable as being different from all other ABC machines in the early series in that they have dark keytops. No other color but white is seen until much later on in the series. This photo expands when clicked larger than most on this site so that readers can get a very close look at the second oldest known ABC. 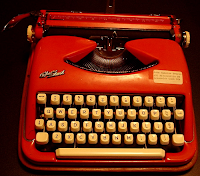 COLE-STEEL / serial 2-24954 / Will Davis collection. This is the third known machine in our database, which is interesting because it was formerly owned by famed television news pioneer John Cameron Swayze. This machine is in the 'tomato red' color and has the leather carrying case. 43 keys. This may be one of the most-used machines in this entire presentation, but it operates perfectly. There is evidence of a few repairs and one modification - the ribbon cutout switch, for making stencils, that this series of machines has (under the ribbon cover) is permanently overridden. Much wear is seen on the carriage by the carriage release, and the keytops show wear as well. Swayze himself was featured in magazine ads for the "New 1958 Cole Portable" and in those ads is quoted as saying that "my Cole Portable has been all around the world with me." This machine certainly looks it, and was well taken care of. Note that while the serial prefix has changed to a "2-" that there are no major changes to operative features of the machine. Further, it is of interest to examine the serial numbers seen so far:

Considering the findings in the rest of the large database we have collected, it seems improbable that about ten thousand machines worth of production are missing even today or were skipped. It might be that the serial numbering was deliberately jumped by addition of a "2" in front of the serials, in which case Thomas' machine and the ex-Swayze machine would only have been 25 units apart. This is only speculation, however, and is supported by nothing in terms of hard fact.

Whatever the case, it does seem very likely that Swayze's machine was among the very earliest Cole-Steel machines and given the advertising information we can roughly tie the serial 24954 to late 1957 or early 1958. This is the first serial in the known production that we can even roughly tie to a date, given the fact that Koch's appears not to have supplied a serial list to any organization.

The ad depicting Mr. Swayze further indicates (by complete list) a total of 186 dealers nationwide offering the Cole-Steel at that time, for a price of $94.50 without tax. Three colors were offered; Mist Green, Desert Sand and Cole Gray. It is interesting to note that the color of the ex-Swayze 2-24954, "tomatenrot" in the original German, or "tomato red" in English, is not listed in this advertisement. Further, the machines were offered with the plastic case lid and not the leather case found on the Swayze machine. 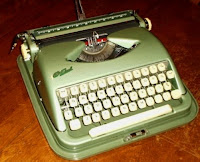 Cole-Steel / serial 2-26472 / Will Davis collection. This machine is seen in the attractive hammertone green paint, which in all likelihood corresponds to the 'mist green' mentioned in the Cole advertising copy. The machine has a green snap over lid. It is interesting for collectors to note that the four earliest known serial numbers for ABC machines are not in fact found only on ABC-branded machines at all; one is the already seen APSCO, and two are Cole-Steel machines which are shown as well. Given the previously discussed serial number discrepancy, and US trademark information to follow, it seems clear that something not yet known to us was occurring early in the production of these machines and it may be that the start of major production volume did not in fact occur until a year or more after the assumed introduction date of 1955 - which given the nature of industrial manufacturing would be no surprise at all. 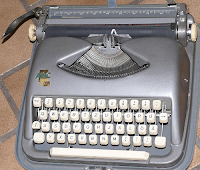 ABC / serial 2-35541 / Thomas Furtig collection. This machine is finished in the attractive gray hammertone paint. The advertisement for the machines seen on our earlier installment in this series showed only four colors as having been available, and the Cole-Steel ad mentioned only three - but as we will see, many more became available and there were even two-color combinations. 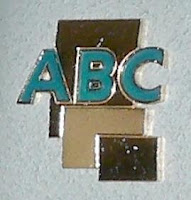 At left, the original ABC emblem in detail from the previous machine. This mark and emblem were filed for trademark in the United States by Koch's on November 15, 1955; the registration was granted May 22, 1956. The US filing indicates that the same design was filed for copyright in West Germany on March 8, 1955. The rights to this mark were retained by Koch's until March 23, 1967 at which time they were transferred to Messa of Portugal, which will be covered in great detail in later installments. 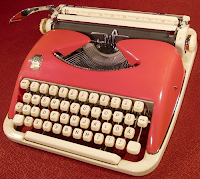 ABC / serial 2-37663 / Thomas Furtig collection. This is our first look at a two-tone machine, combining tomato red for the upper body and beige or 'creme' for the lower. One of a number of possible combinations offered later. The machines continue to have 43 keys typing 86 characters, with a ribbon cutout for making stencils (one color ribbon only) and no tabulator. Essentially the machines are still as originally manufactured.

Our next displayed example will reveal changes that have been made to the machine prior to its manufacture; at this point we will break from the lineal progression to note the points in serial numbering at which changes were made.

The alteration to the keyboard as a result of adding an extra character key was the displacement of the margin release key from its former position at the left end of the top row to the left end of the second row down. The new character key was added to the upper row, and on most keyboard layouts this allowed the addition of a numeral "1" to the keyboard. 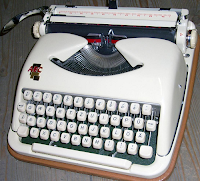 ABC / serial 3-54640 / Thomas Furtig collection. This machine displays the revised 44 key arrangement as described, and also barely visible on the right side of the machine is the three position ribbon selector switch. This is alongside the body, just in front of the carriage. This replaces the previous stencil ribbon lift cutout device, and gives true two-color plus stencil ribbon availability in line with most other portables of the day, large or small. The addition of one further key to the keyboard also brought the machine well in line with competition of the day.

Closeup from an ABC sales brochure of the lever selector, directly from the side. The round object upper right is the platen knob, not seen fully, while the corresponding color dots are actually on the removable top cover.

NEXT INSTALLMENT: Continuing with the original Wagenfeld design production in Germany...
Posted by Will Davis at 1:22 PM